By most accounts, durian is one of those things that you love or hate.  For those unfamiliar with durian, it is a fruit common and revered in southeast Asia, known as the "King of Fruits".  One other thing for which durian is known is its distinctive smell.  Some have placed the smell somewhere between pig excrement and smelly gym socks.  Any way you look at it, this is a must-have experience for a food adventurer.  It is the polarizing foods that often bring the greatest food experiences.
My experience with the durian:
The visual of the durian definitely doesn't inspire confidence.  After hearing all the stories about it, the weapon-like exterior could be seen two ways: "STAY AWAY!" or "There's something good in here, but you're going to have to work for it." 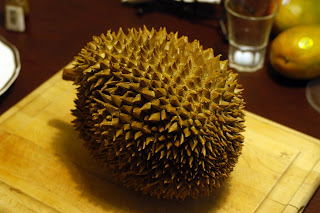 Even before cutting it open, I had to gauge the smell.  As durian is not grown in the US, this durian was frozen and shipped here.  I'm told this has a calming effect on the scent.  What I can say on first whiff is...  nothing.  There was really nothing about it at all that was off-putting.  Distinctive, yes, but not at all disgusting or stomach turning.
So, it was time to cut it open.  This is not your typical fruit unveiling.  This makes pomegranate look like a walk in the park. 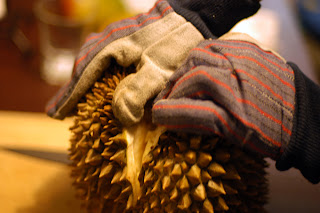 Once again, the mandated "Get your nose in that thing."  Ok... a little bit stronger smell, but still nothing that I'd say was anywhere near "bad", let alone "disgusting".  The excavation continued.  Eventually, the literal fruits of the labor. 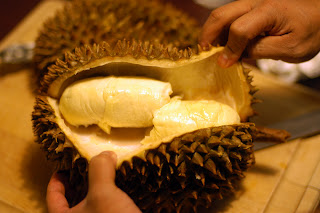 Now visually, I can not say that this is the most appealing looking food.  It's somewhere in the neighborhood of raw chicken, something echoed independently by my wife.  This is when the blood pressure began to rise.  This was the moment of truth.  Time to eat.
I grabbed a mass of the stuff and took a little nibble.  Not bad.  I ate a little more.  I got a good mouthful of the stuff.  The closest thing I could connect it to is lychee.  It's definitely very different, but there's a hint of lychee there both in flavor and texture.  Now after that first bite, I wasn't really sure I wanted another.  It wasn't bad, but it also, so far, wasn't something I could see actually looking for.  But I had heard that it improved with further eating, so I marched on.  Next bite was better.  As was the one after that.  As I grabbed another mass of the stuff, I had a vision of sitting in a shack in southeast Asia with a bunch of other guys grabbing hunks of this stuff and tearing off pieces with my teeth as the juice runs down my arms.  The image works.  I can totally see the communal element of this.
Overall definitely a great experience and one that I recommend for others.  I do plan to get a fresh one, despite the high cost, during the summer to get as close to the full experience as possible.  Smell and all.  Big thank you to Dave for the experience.
Posted by Consumer at 8:37 AM