I'm not talking about Al Franken here. I'm sure he enjoys some pretty good food. What I'm talking about is food that was really never meant to be. A twinkie is a good example of frankenfood. How is it that something you eat can sit in a bag for 1,000 years and taste the same as the day it was packaged? That's progress. Actually, apart from the general avoidance, there is an unusual fascination with a food that I see and say "wow... whoever thought of that was really missing their self editing function the day they thought of that!" This of course leads directly to "I wonder what it tastes like..." In almost every case of this sick fascination, it is a single trial. This was certainly the case for the McDonalds breakfast sandwich that had maple syrup flavor in the "pancake" bun of the sandwich, aka the McGriddle. This is really the predecessor of the oft featured ultimate frankenfood often seen on The Daily Show: the Jimmy Dean Chocolate chip pancake covered sausages on a stick dipped in baconnaise. Some people are so enthusiastic about the pancake/sausage on a stick that they not only admit they eat them, but one mom reviewed them at the Sam's Club website and admitted the whole (supersize) box of 18 were eaten by her family in 5 days. I really am lost in conflict between hoping she and her husband ate them all and hoping she has 18 kids. Either way, this is a good example of negligent parenting.

I recently found myself with the need to stop in somewhere to use the restroom. When stopping at a fast food restaurant, I really feel an obligation to buy something, usually the cheapest, smallest thing on the menu. I would really prefer if the restroom had a tip jar... if only that was the biggest problem with fast food restaurants. Anyway, I found myself at a Del Taco looking over the menu when something caught my eye. "jalapeño rings". I had to ask... the 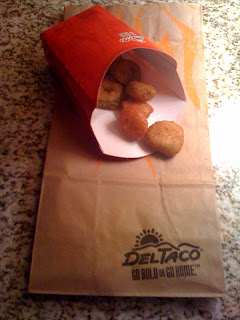 woman at the counter said "They're slices of jalapeno that are fried..." I guess that makes sense. Well, that became the item of choice. I guess it is a natural progression from onions to something more significant, but I have a hard time imagining they sell to many of these things if they're really jalapeño. As it turns out, they are... I think. With the variation in spice level found in jalapeños, I found this an interesting choice of menu items for a fast food place, but perhaps they found a way to apply society's advanced technological capabilities to equalize the heat. The 'rings' came with some sort of cream sauce. I'm not really sure what it was even after tasting it... And they refer to it on the Del Taco website as 'secret sauce'. Now, typically jalapeños are green, but green just didn't cut it for Del Taco, so they added red jalapeños into the mix as well. Unfortunately, they were a bit unnatural in their red color, but they should get some points for swinging the bat even if they were playing basketball, right? Now it may be difficult to see from the picture, but the while both colors of jalapeño were unnatural in their color, the red one was almost glowing. I think they were radioactive. 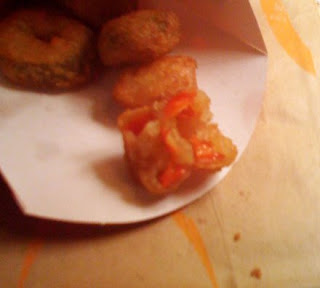 In conclusion, as with most of these experiences, I am reasonably certain that I will never be eating a jalapeño ring from Del Taco again. But you never know unless you try! This time, I ate it so you don't have to...
Posted by Consumer at 4:11 PM